As a Midwest winemaker in Nebraska, you better learn to handle the obvious comments like, “you make wine in Nebraska”, because you’re going to hear it a lot.   Napa winemakers got the same type of comments from the wine world until 1976 when they had their trial in Paris moment. That day is coming for the Midwest, for me it came when our dry Brianna wine was named “Best of Show White Wine” April 2012 at “The US National Competition, Sonoma, CA. 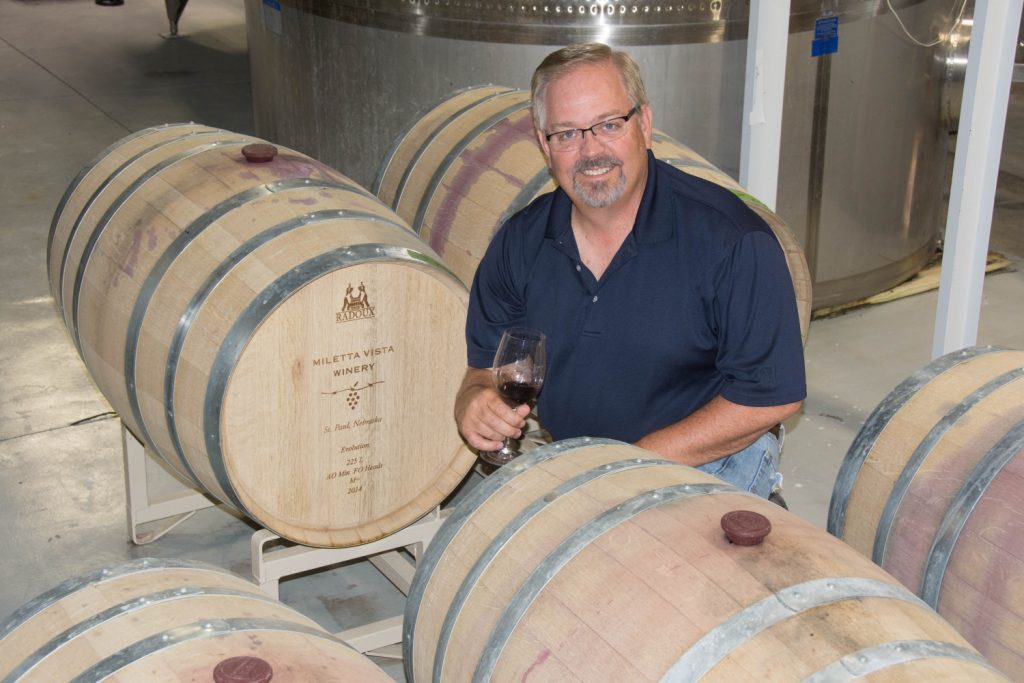 The US National award winning Brianna was written about and discussed by west coast wine critics for the next 36 months and even got us mentioned in a book by Dan Dunn. Clark Smith used it in several of his teaching seminars and that was a huge honor. That type of recognition helps legitimize Midwest wines and bolsters your confidence in your ability to make great Midwest wines.

You suffer a bit after an earth-shattering event like the 2012 fire. After all, you’d spent years planning, grant writing, construction and marketing, all gone up in smoke. However, once my wife and I decided to rebuild, I also decided that I needed to see if my wines could win awards again, or was 2012 a just a fluke.

It only took us 345 days to rebuild a bigger and better facility, nearly 12,000 sq.ft in all, then it was time to prove to myself that producing great award winning wine was again possible. I adopted the slogan that year, “Every Bottle-Double Gold.” Pretty bold or perhaps prophetic, because in 2014 we entered three wines in Florida and received three (3) Double Golds. In November that year, we entered our 2013 dry Brianna and it was awarded a coveted Jefferson Cup and two golds. At that point, you knew that Cold Climate Grapes and a Nebraska farm boy could compete with the Chardonnay, Riesling, Sauvignon Blanc and the Fume Blanc.

A native Nebraskan, Mick grew up on a traditional corn and livestock farm north of Trumbull, Nebraska.   He learned accountability doing farm chores and by competing for 10 years as 4-H club member.

His education continued at the University of Nebraska, where he received both his Bachelors and Master’s Degrees. Mick taught Vocational Agriculture, one year before moving to St. Paul, Nebraska as a UNL Extension Educator, in Howard County, St. Paul, Nebraska. He went on to have a career as a Real Estate Broker and Certified Appraiser and still actively works with those licenses.

Only 40 minutes north of his home town of Trumbull, the agriculture and the countryside around St. Paul, Nebraska is much more diverse than the flat-farm country he came from. The countryside of Howard County with its rolling countryside soon sparked Mick’s thoughts of potential attractions that featured the rugged hill country. Miletta Vista sits on a hilltop 350 feet above the North Loup River Valley and soils are varied.

Mick’s early attempts at wine making didn’t start until the early 1990’s as a hobbyist.   In 1999 he and his wife Loretta, attended a workshop for the burgeoning Nebraska industries of grape growing and winery start-ups. In 2001 he and his wife Loretta purchased the land where Miletta Vista Winery is located on Hwy 281 just north of St. Paul, Nebraska. In 2002 they planted their first commercial vines.

The winery opened in December of 2007 and soon it became apparent, they were going to need more grapes to meet the demand. Mick began buying grapes from other Nebraska growers as Nebraska’s Farm Winery Act requires at least 75% of the wines be made from Nebraska-grown grapes.   While some might view this as a hardship, Mick says, “ this offers Nebraska an opportunity to create it’s wine identity from it’s own AVA.” Currently, nearly 70% of the grapes needed at Miletta Vista are bought from 14 Nebraska growers who sell Miletta Vista some of the state’s best grapes for winemaking.

Blessed with awards that relatively few winemakers receive, Mick’s passion for creating great wines has excelled in his short time as winemaker, including two Best of Show White wines, a Jefferson Cup award, numerous Double Gold as well as many other awards.   All from wines created from the cold climate grapes grown in Central Nebraska.